Sorry folks fore being tardy on my blog update on this...Blogger just wasn't cooperating with me last night. HEhehehe,sorry about that Acom! XD Well,here is the link to the teaser that's been launched officially last Friday by our Prime Minister himself, Pak Lah. http://www.saladin.tv/
The scene that you are about to see was taken from the old script meant for a feature production, but has since been changed to be made into a 13 episode tv series. You can clearly see how much the designs from the teaser to the buntings below differ from each other. Much has been altered to the look and mood of the cartoon since last year as this new version is aimed gnerally at the younger generation and more family orientated audience. 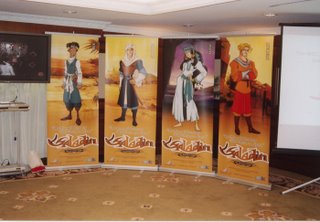 The new designs for the main cast for the animated tv series above. From left to right: Tarik (Saladin's best friend and closest comrade in all of his adventures), our hero Saladin, Anisa (Sal's love interest) and Duncan (ex-Frankish knight disillusioned by the realities of the Crusades,now joins Saladin in many of his adventures).
This first 13 episode series takes place during Sal's teenage years, as we follow Sal thru' his many adventures around the time of the Crusades before he became the legend that he is known today. 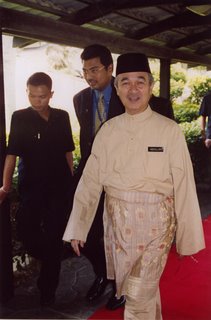 Gotcha! Hahaha, gotta love a politician with a sense of humor. Our PM actually reacted as tho' he has been shot when I took this pic of him when I was ahead of the press photographers in the red carpet aisle leading towards the main auditorium. "PAM!" he exclaimed. 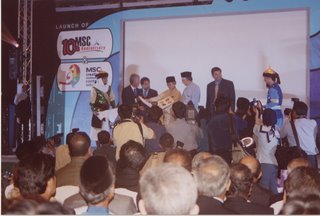 The Saladin launch coincides with our company's 10th anniversary with the unveiling of our company's new logo there. U can see this pic above of our PM being given a limited edition copy of the Saladin artbook made specially for that occassion. Below, after all the formalities are done,it's time for the screening of the 'Saladin' teaser. 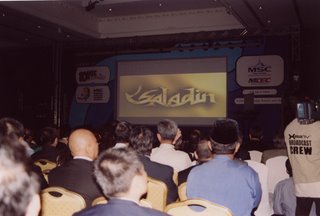 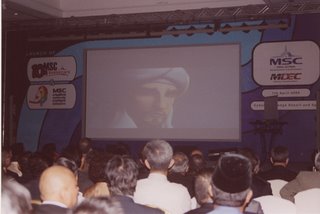 Hope y'all enjoy viewing the teaser. Mind you, all this is still at the experimental stages, and we've still a lot of grounding to cover...from the character animation,voice recording,editing etc. However, this is the first time our govt is supporting our creative industry by funding this project as we all work together to see this project thru'...and from the looks of it, things are finally taking shape and moving along.
And the whole look of the cartoon had to be done in 3D as we're sorely lacking in 2D animation skills here in Malaysia. Plus the fact of the time and budget constaints and quality control/consistency issues, this project for now,couldn't be achieved any other way.
'Nuff said, and we've still a long way to go....but this is a start. The pilot episode is slated for completion by the end of this year,so hopefully....we'll see how things go.

Cheers everyone!
Posted by Sandra Khoo at 9:27 AM

Can't wait to see it on TV!

Hope it comes out in VCD/ DVD or something because I am just plain awful at catching up with TV shows. XP Way cool Sandora. :D A big congrats.

i personally prefer it to be 2d,
but anyway.. i still can't wait to see it...

cool trailer! the figures seemed kind of clunky at first, but as the action started, they got more fluid.

i also would have preferred 2d.

what a wonderful career you have!
continued success,

wow you have some nice stuff in here!

Hampsty : Hehehe,thanx Hammie! We'll just hafta see what option they choose to do...Thank you so much for the support! ;)

Hteekay : me too! Eeeee,suppose to wrap up the pilot by the end of this year...hope everything will run smoothly.

DC Steven : Hey,thanx very much Steve! And thanx for keeping track of my progress here...wish I can say I did the same for yours tho....>.< Wish I had a stroger body to stay up for longer hours. ;)

MackayD: Thaaannnxxx Mac! So very sorry I didn't post anything up in the sticky notes blog yet tho...I'll try n get something done for it. ;)

Fantastic news Sandra! Congrats! From the looks of it, you did a great job designing the characters.

Hi Faiz here. Just drop by to say that u're pretty cool !! can't wait to see saladin on screen. Keep up the good work and hopefully one day we could tag. I love 3d animation and perhaps I would make one from your sketch if you allow it ~

Faiz : Hey Faiz! Hahaha,so you've commented after all.Heee,sorry for my late response. Sure,go right ahead and lemme know how it turned out,yea? ;)

Mistaman : Oooooo,da boss is watching...O.o Gonna add u to my watch from now on. I have u in my quirky world now,Gurgi! Sandra Khoo
Director (Overall Production,Story & Art) by day,and working on my own pet projects & animation short by night. Am also a self professed food junkie. (All artworks and photographs therein are copyrighted by me,unless mentioned otherwise, and cannot be used without prior consent). A Language A Day